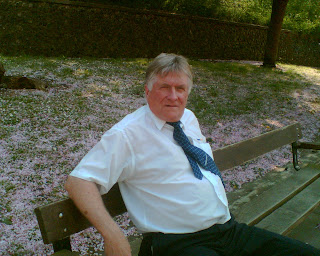 I want to write a few words about my friend, my colleague and my mentor, Grahame Collinge, who passed away very suddenly on Wednesday 10 June 2009.
I meet a lot of coach drivers in my life but Grahame was truly unique. He became a close and true friend, both to me and to Louise and we both miss him very, very much.

Paris and Beyond
The first time I ever worked with Grahame was on a Paris tour.
Upon arrival at the hotel, while getting the luggage out of the coach, my copy of the Rough Guide fell out of the briefcase and landed in a puddle, ruining it.
Grahame was really distraught, as I think he thought I’d be relying on it for the tour. When I managed a tour without it, I don’t know if he was relieved or what but he always used to tell me I did the best tours of Paris. He might have said that to every guide he worked with but he did sound awfully sincere and he did my confidence no end of good.
Certainly, when joining a tour en route, I could always be sure he’d told everyone what I’d be doing and assure them that they were in good hands. He’s the best warm up act I’ve ever had!
I’ve lost count of the places where I’ve worked with him: London, Paris, Cologne, Norwich and Milton Keynes all spring to mind, but there were many others. With Grahame, it was the company you remembered, not the destination.

Grahame in the Culinary Capital of the World
Working with Grahame in Paris was always a pleasure.
It’s not an easy city for coach drivers, with difficult routes to negotiate (especially when being navigated by me) and draconian parking conditions.
When taking the group for an evening meal up in the Latin Quarter, coach parking was virtually impossible, unless the driver remained with the vehicle, ready to move it if the police appeared. To make up for this, I would always get the restaurant to plate up a meal for the driver and take it on foot up the hill for him to eat while we were all in the restaurant.
Well, on one occasion, I took the meal up as planned and quickly returned to the good food and music back down in the restaurant. Later in the evening, walking the tired but happy (ie “merry”) group back to the coach, we settled in for the ride back to the hotel, for Grahame to pop up on the microphone and explain how I’d provided him with a lovely meal of beef with all the gravy and sauce and vegetables, just as they’d had…….but with no knife or fork!
Undaunted, he’d improvised by cutting up and eating the whole meal using a teaspoon from the drinks servery on the coach!
On another Paris trip, I ended up translating a French television news report about the Oldham riots. I confessed that I was having trouble with one word, which sounded like “glodique”. To Grahame’s intense amusement, this turned out to be the French pronunciation of Glodwick, an area of Oldham, apprently. Grahame trotted that story out to groups in my presence for years afterwards.

London
On another occasion in London, I was telling the group all about the beheading of Anne Boelyn and how as queen she had the right to choose the axeman who would behead her. Without missing a beat, Grahame chimed in to say that, in her place, he’d have chosen David Blunkett!
Shortly after I met Louise, Grahame and I worked together on a London tour.
One day was completely free and – as we were staying in Central London, - we went for a walk.
Grahame was suffering from gout at the time and “couldn’t do much walking”. I, however, had just met Louise and was determined to tell Grahame all about her. So I suggested that we go for a “short gentle walk”. While listening patiently to me, we walked right across Central London, from Marble Arch to the Tower! All the time, Grahame listened intently and made all sorts of encouraging noises about how I might “play things”.
He must have said the right thing as Louise subsequently became my wife and Grahame was an honoured guest at our very small wedding. And not once on that fateful day in London did he complain about his gout!

More memories
Laughter just abounded with things that happened to him.
He took a group to an hotel in Reading once, where the receptionist allowed everyone to check into rooms…….only for the manageress to then come to Grahame to tell him that it was the wrong hotel! Everyone then had to pack up again and move down the road. This was caused by a mix-up, not Grahame’s fault. But no group could have blamed him for anything anyway. His personality was so friendly and lovable that you couldn’t have disliked him if you’d tried. No one ever did.
It was as varied as hearing him talk about losing his glasses in the River Seine, or being stranded at Dover with half a coach of Chinese who were refused entry to France. Relying on less-than-professional tour managers was another source of stories, all told with the Collinge sense of style. There were three hotels in Brussels called "The President”, he said once about such a tour, “Guess which two we went to first!”
He was always going on to me about being educated in “Northern things”. This often seemed to centre around getting me to sample a “Holland’s Pie”…….a delicacy unknown in the Midlands. When I eventually found one for sale and ate it, in Blackpool, I had to ring Grahame straight away to tell him!
When he applied to get a cat from a rescue centre, the officials deemed his home too near a main road for a cat. They did, however, say that he was eligible to adopt a goat, which wasn’t quite what he had in mind!
At one time, Grahame was the proud owner of a BMW.
On one trip away, he received a slightly frantic call from his coach company to say that a “steam roller” (sic) engaged on work in their yard had “run over” his car. He said he expected to go home to find the said vehicle 60 yards long but two inches high. Fortunately, it turned out to be a minor collision!
Improvising seemed to be a speciality of his.
On another occasion, bound for foreign parts where kettles in rooms are a rarity, at a motorway service area he bought a “Travel Set”, consisting of a travel kettle and a steam iron.
Upon arrival, he found that the kettle didn’t work…….so improvised for the duration of the holiday by boiling water for his tea in the steam iron!
One night, I found myself in Manchester, trying to get from Piccadilly Station to my hotel. There was some problem with taxis, so I decided to walk but wasn’t sure of the way.
I called Grahame, who was indeed able to help me…….but who was having problems of his own at the time.
He was in Blackpool, having taken a football team from Manchester’s Chinese community to play a match. Unfortunately, the so-called “friendly” game had proved to be anything but and a fight broke out with the opposing team during the match.
Again, Grahame’s legendary story telling abilities enlivened the tale, as he recounted scenes of flying leaps culminating in Kung Fu style kicks!

Family Affairs
Grahame always spoke with great love and affection about his family. They were all people who – although I never met them in his lifetime – I felt I knew so very well!
Grahame would always regale me (and others) with tales of his late mother, who remained fit and active into her eighties.
A favourite story of his was to tell how – upon seeing television pictures of prisoners rioting on the roof of Strangeways Prison – she commented that these people “wanted locking up”! As told by Grahame, though, this was a much better story. He had a comedy timing which went very well with his accent (I always thought he sounded exactly like Les Dawson).

Last Words
As it turned out, the last time I was ever to see this special, special man was just a few weeks ago when he brought a group to Stratford-upon-Avon and arranged for me to do a tour for them.
It was – like every job with him – a pleasure from start to finish.
He’d prepared the group for me (the best warm-up act in the business, remember) and we had a great time, with lots of laughter with the group during the whole tour.
At one point (and bearing in mind I’ve been guiding in Stratford for 18 years), he managed, in true Grahame fashion, to misunderstand what I’d said and took the coach down the wrong road, taking us through a residential street, to the amusement of everyone on board.
“Eighteen years I’ve been at this” I yelled at him in mock frustration “and still you’ve managed to get me into a road I don’t know”!
As it happened, Louise wasn’t working that day and she came along and met us at the end.
She and Grahame laughed and hugged and he joked to me that he was taking her back ‘Up North’ with him.
We laughed and waved goodbye and said we would indeed come back ‘Up North’ to see him next time.
We were never to see him again. Louise and I were very honoured indeed to have known this kind, jolly and wonderful man; we truly will miss our dear friend Grahame.
Posted by Ian Jelf at 22:02