It is a fact of life that I do not enjoy doing things I’m not very good at. Put me in front of an old building, a Roman ruin, a bus or the Sydney Opera House and I will happily keep an audience entertained for hours.

Louise is poorly at the moment (having caught the bug I had last week) so I’m being more than usually domestic. I have today been out with a shopping list, little of which actually tallied with what seems to exist on the shelves.

“No, not that one, the double chocolate ones we usually have”. Sigh.

I have tried to make the washing machine and tumble drier work.

And now I've put two duvets back inside their covers in a series of moves which to the untrained eye would make it appear that I was playing a strip version of “Twister”.

Get well soon, Louise. I need you!

(But I know I’m better with canal architecture and Iron Age earthworks. I'll let you know about the pancakes.......)

The Meaning of True Love. Apparently. 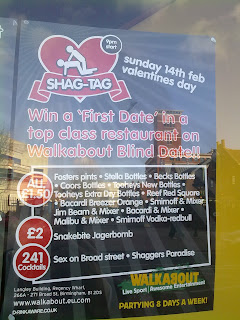 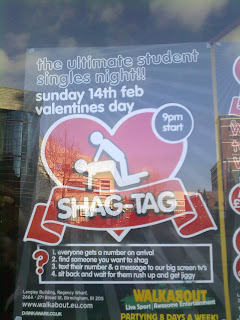 Well, it is the feast of Saint Valentine, a time to think of true love, companionship and the meeting of hearts. A time perhaps to do a lighthearted "love-themed" walk in Birmingham (one of which I did this morning) and a time to discard the often vulgar trappings of modern life in favour of the simplicity of genuine romance.
Well, I thought so, until I saw these adorning the window of a bar in Broad Street, Birmingham.
Is true romance dead? Am I getting old? Am I a prude? Apprently, yes.
Posted by Ian Jelf at 17:07 1 comment:

In an era of mass produced identikit synthetic "celebrities" lacking no talent other than, er, "being famous", it's wonderful to see someone with talent in spades: Bill Bailey.

Last night we watched "Bill Bailey's Remarkable Guide to the Orchestra" which originally went out last year on BBC 2. The guy is nothing short of a genius. Every time he opens his mouth you realise that he understands what he's talking about and his ability to dissect pieces of music and notice things you'd never otherwise see is a joy.

Proving to us that the theme to Panorama sounds more-or-less the same played forwards or backwards.

Making us wonder how ITN's Non Stop could ever function as a serious news theme. (But it was, for decades!)

Helping to play Saint-Saens' The Swan on cowbells.

And making NBC's Nightly News theme The Mission out as something of a modern day classic.

But without any doubt, the piece de resistance was turning to theme to Doctor Who into a Belgian-style jazz piece. The sooner that's released commercially the better.

I see that Amazon have the DVD. Go and buy it at once!

A lot has been written in the last few days about Kraft’s takeover of Cadbury’s. Indeed, if I hear an American accent calling it “Cad – berry” once more I’ll not be responsible for my actions…….

It is truly the end of an era and all that. But people can wring their hands as much as they like. Cadbury’s shareholders were free to dispose of their shares as they liked…….so 71% of them did. Given the immediate offer of cash, I for impressed that as many as 29% of the shares were in the hands of people who still voted against it.

Of course you could argue that the should have rules that restrict this sort of hostile take-over. Remember, Cadbury’s wasn’t LDV or Rover. It wasn’t a “basket case”. It’s successful, not in need of investment or help and didn’t want to be taken over. But once you’re a plc in the you are very much prey to this sort of thing. When you stop and think about it, it’s like the lunatics running the asylum.

I’m petty sure that in the short term little will change. Indeed, if you work for Cadbury’s at Keynsham, you might think this is a Good Thing as Cadbury’s were planning to close that plant and Kraft have said they’ll keep it open. In the medium to long term, though, things might not look so good, in Keynsham or in .

The problem with all this can be summed up in three words: Terry’s of . Kraft have “form” when it comes to buying confectionery firms and then shipping production somewhere cheaper.

Cadbury’s brand is strong. The chocolate is the best in the world (as I was explaining to some Swiss visitors only last year…….) and evidently it’s a product “worth having”. Indeed, Kraft seem to have taken a big financial risk themselves to get their hands on Cadbury’s.

I don’t think they’ll do it soon. But I have a distinct feeling that in the medium to long term, things will be irresistibly different. My fear is that in ten years’ time Crème Eggs will come from and the Bournville Village Trust will be worried that a giant IKEA is rising up overlooking the village green on the “”. If I’m wrong about this, no-one will be more pleased than me.

I think I’ll go and get some Dairy Milk now, while I can still do so without the guilt.

Incidentally, it’s worthwhile mentioning that none of this affects in any way the Garden Village of Bournville which, surprising to many, does not and never has belonged to Cadbury’s. George Cadbury set it up (with commendable foresight) as an independent charitable trust. Indeed, many of the things that are being bandied around as “special” at the moment pertain to the community of Bournville, rather than the factory.