Snow: The End of British Civilization. For a Couple of Days.

There's some snow. It's earlier than usual but it is December tomorrow and we've 200 years of tradition of illustrating Christmas with snow scenes, so it's not that amazing.
Yes, some areas have had a lot of it and rural life can be disrupted. But here in the urban West Midlands we have barely enough to cover the ground and even our road, a fairly minor one, has no snow on the carriageway. So it's not the end of the world.
But guess what? There are lists of closed schools and cancelled events everywhere. Why on Earth do we do this in Britain? Are we afraid that if someone hurts themselves, "we" as the organiser of an event or the opener of a school will somehow be liable? And if you want to tell me that the heating is off, that begs the questions *why* is the heating off? Or is it that teachers now all live in barn conversions 40km from where they teach?
Basically, we're all namby-pambies who think that a few centimetres of snow represents the onset of a new ice age.
Get out there. If only to build a snowman!
Posted by Ian Jelf at 10:03 1 comment:

Ian: If we were in Victoria, instead of me freezing doing a walking tour of Lichfield today, we'd be voting today and enjoying a "Sausage Sizzle".
Louise: What's a "Sausage Sizzle"?
Ian: Apparently, it's a sort of sausage barbecue they have for people queueing to vote.
Louise: What a great idea. But what if you're vegetarian?
Ian: Don't be ridiculous. This is Australia we're talking about.
Posted by Ian Jelf at 07:36 1 comment:

Ian: So Where in Australia are you from?
Client: Sydney
Ian: Oh great. Loved it there. I always feel a bit of empathy with Sydneysiders, as I come from a second city, too.
Client:
Ian: I didn't mean behind Canberra, I meant behind Melbourne.
The conversation ended at that point.......
Posted by Ian Jelf at 18:01 2 comments:

Just a Reminder that it's still November. Honestly.

In the last 48 hours I've seen three houses decorated for Christmas and with their Christmas trees up.
Not commercial premises you understand (ie shops where "Christmas" seems to begin in late August) but ordinary, domestic houses. In November.
Good grief!
Posted by Ian Jelf at 16:45 3 comments:

In the fading sunlight of the afternoon, we've just sprinkled Bobbie's ashes in her favourite sunbathing corner of the garden.
I penned some words for the occasion.......

We loved to stroke your jet black fur

We loved to hear your contented purr

To tickle your belly or just sit with you

That’s all we ever needed to do

We see you still, just waiting there

To be fussed and teased, on your favourite stair

You came to our lives by accident

But – goodness! – how much to us that meant

We watered, fed and cared each day

But ten times over did you that repay

With your companionship and care

From dawn ‘til night you were always there

No more shall we brush you, nor clip your claws

Nor play with your ears, nor hold your paws

No more can we cradle and comfort you

Though we know we’ll still always want to

So stretch out and rest in everlasting sunshine

Until we see you again in the course of time

You were our Bobbie…..the very best! 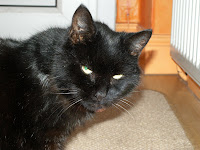 We never acquired Bobbie; she acquired us, having previously lived with a neighbour. She gradually wedged herself firmly into our affections and became – in all seriousness – part of the family.

She’s been here as long as Louise and I have been together and she’s had several health scares, always fighting through them. She was, despite her small size and delicate nature, a real battler.

She enjoyed simply “being with us”, not necessarily doing anything, not being excessively fussed but just being there, sitting quietly, indoors or out, with us. She wasn’t usually one for playing with cat toys but a long piece of fabric Louise bought in a pet shop in did become a real favourite.

Like all family members, she had her routines, even if she did have to get used to “parents” who have wildly-variable times for getting up. Be it or , she was there, at the top of the stairs waiting for morning fuss. Then she would follow down four stairs and stop, with her head through the balustrade, so that she could be fussed from one of us as we arrived in the hall below. Then – and only then – was it time for breakfast.

She was there to provide company for us both when we were down and happiness for us when we weren’t.

When we were away, she too enjoyed going on holiday “to grannie’s” and even when she developed health problems, she was always impeccably behaved for her “Australian friend” (ie the vet!).

I’d rather dwell on Bobbie’s life than her passing, so suffice it to say that it all ended suddenly and painlessly this evening.

Thanks for letting us share your life, Bobbie. You were an integral part of “us” and we’ll miss you!

As Others See Us

There is an interesting phrase employed by Robbie Burns in his “Ode to a Louse”: “to see ourselves as others see us”.

Inspired by this, I always keep a look out for coverage of affairs in overseas media outlets. One of my favourites is ’s ABC, basically the only real rival in terms of quality for the BBC, I’d say.

But their coverage of affairs is incredibly, overwhelmingly, scarily, bizarrely dominated by what’s going on in the world of sport. And not just the stuff you’d expect, like cricket and Rugby, but even football, a game Australians don’t really even play that much. You'd think that nothing happened here other than sport.

Don’t take my word for it. Have a look!

I've just noticed that Vicky Leandros is opening Birmingham's Frankfurt Christmas Market.
You can't beat a French-speaking Greek who represented Luxembourg in the Eurovision Song Contest and now lives in Germany to open a Christmas Market in England, can you?
Posted by Ian Jelf at 22:35 1 comment:

I’ve a bit of an announcement to make.

Not many people have been aware of this but…….for the last 18 months or so I’ve been studying away and sitting exams to qualify as a Blue Badge guide for the South West of England.

Well, today’s post brought the news that I’ve passed the final one, a bit of news I was hoping for but – shall we say - not confident about.

My new region overlaps a little with places where I’m already qualified (notably Gloucestershire, and ). But it opens up some places that are very special to me indeed. Briefly it comprises Somerset, Bristol, Gloucestershire, Wiltshire, Dorset, Devon and Cornwall. Some of you will be aware that I’ve been working in some of this area for some time. One of the reasons for taking these exams was to formalise that arrangement somewhat. Thank you to all those who’ve booked me and been on walks in much of this area. Your work and tolerance helped me get to this point and my gratitude is very real. (I even managed to weave subjects like and in to the practicals!)

So here we are.

If you happen to know anyone who would like to book slightly off-the-wall tours in any of these areas, do send them my way!