I've been meaning for ages to post pictures of some of the offbeat signs I come across on my travels so here goes...... 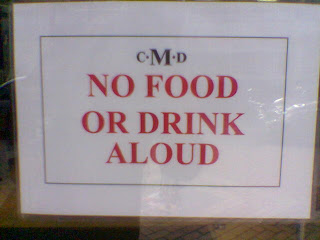 This one was on the window of a shop in Birmingham City Centre. I sometimes wonder what sort of return we've had on investing in 120+ years of free education in the country. 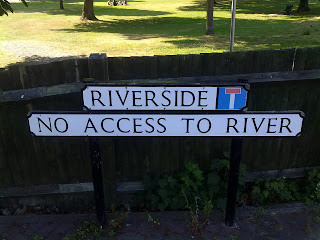 This next one was spotted in the lovely Thames-side village of Marlow. 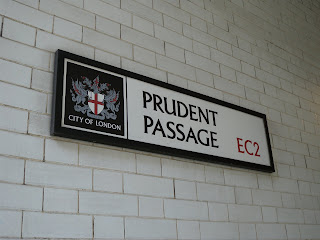 And last but not least, the City of London has a fair few unusual street names but this one caught my eye just off Aldersgate Street
Posted by Ian Jelf at 09:48 1 comment:

I've meant to plug Nick Bache and his mobile PC Doctor business for ages. He's provided a PC and support for my business set-up and all sorts of informal (and thus unpaid) advice over the past couple of years or so.

This morning, when he really had other things on his mind, he helped with yet another crisis without hesitation.

In an era when it's much more fashionable to moan about service providers (as I do a lot) it's good to be able to be so positive and to be able to recommend someone so heartily.

So, if you're in Central England and need help or support, tell him I sent you!

It is a remarkable thing that when famous people die, we always seem to want to eulogise them and say positive things about them. Sometimes we do that about truly great people, sometimes about complete swines. And sometimes we eulogise about people somewhere in between.

The death of Senator Edward Kennedy, the youngest of the ill-fated Kennedy brothers, was announced at breakfast this morning. He leaves behind him an impressive senatorial career and can quite rightly be credited with putting his name to legislation which has improved the lot of the disadvantaged in American society.

But, having a background in Massachusetts and thus Boston, the spectre of Irish (or more correctly "pseudo-Irish") politics was always. His attitude to the "Irish Question" was at best naive and at worst simply smacked of pandering up to the "Irish Vote" by making all sorts of ill-founded accusations about the status of Northern Ireland.

Kennedy's father Joseph, whose faith in a British victory in WWII was non-existent when he was Ambassador to the UK, was no friend of Britain and this perhaps brushed off on his youngest son more than the others. People who were raising money for those bombing, maiming and killing were feted as "freedom fighters" by that same "pseudo-Irish American" community whose votes Kennedy wanted. They (like their loyalist counterparts; there's no sectarianism from me here, make no mistake) were terrorists, plain and simple. The same as those who flew planes into the World Trade Centre and the Pentagon and who bombed bars in Bali and trains and buses in London. I cannot today but think ruefully - as many have done since then - that it took those awful events in September 2001 to make some sections of American society see terrorism (ie murder) for what it is.

And it is that, not Chappaquiddick, which stains Kennedy's character for me.

Perhaps Kennedy's greatest achievement was that he - unlike all his brothers - lived a natural life span.
Posted by Ian Jelf at 15:48 No comments:

Well, one of today's "headline stories" is that Channel 4 has decided to axe "Big Brother".

Needless to say, I'm gutted, devastated, distraught and tearful. Not.

I believe I may, just possibly, be the only person on the planet not have actually seen it other than the send up of it in "Doctor Who" and clips on "8 Out of 10 Cats".

If the latter is anything to go by, we're well rid of it. It looked like a hysterical fame-for-the-sake-of-it nobody-fest where people were lauded for being nothings and nobodies, as opposed to being admired for climbing Everest, sailing around the world, singing beautifully, curing diseases or making people safer.

It is perhaps lost in the mists of time now that Channel 4 was set up to provide an alternative, complementary service of original programming of a type which would never normally go to air on a commercial television network. Jeremy Isaacs forged it in its early days as something quite unique.

"In today's multi-channel environment" as the mantra goes, this is the sort of thing which is more necessary, not less.

A Couple of Afternoon Thoughts.......

Self cancelling indicators on cars are the invention of Satan. (Thankfully the 2CV is not cluttered with such technological excess baggage.)

The dustmen have been this morning.

We’ve been away camping for a few days down in Cheddar (which neatly dovetailed into a job I had yesterday in Weston-super-Mare).

I like camping very much and – provided you have good weather (which we did) – it really does have a sense of getting away from it all.

The downside of this has manifested itself this morning, though. The house now looks as though a small and highly-localised hurricane has just swept through it with assorted bits of equipment spread everywhere: innumerable folding tables, shelters, matting, bedding, pumps and chargers to name but a few.

I ought to be putting it back but it’s a choice of that or sorting out new walks before a meeting this afternoon. Not to mention 42 e-mails.

Tidying up has just lost.
Posted by Ian Jelf at 09:22 No comments:

From Dinosaurs to Cafe Rouge

We’ve been to see “Walking With Dinosaurs” at the NIA tonight.

It was Louise’s birthday treat and to be honest I didn’t think it was really my sort of thing. Obviously, I’m often accused of being a dinosaur but that’s not quite the same as empathising with them.

However, I’ve come back in and started typing this almost straight away because I was so impressed with it. You spent a whole chunk of the performance trying to work out “how they did it”; but it was also an entertaining wander “through the ages” (literally, of course). And it was good to see something which attracted such a wide range of ages. In a country where people tend not to socialise between the generations, this really stood out.

Incidentally, beforehand we ended up eating at Café Rouge. Normally, with their faux-French over-translated signs, I tend to dismiss this particular chain as being about as French as Morris Dancing. However, I was pretty impressed with our experience there too, tonight, especially as they had merguez on the menu. (That’s a spicy North African sausage normally only found in ethnic fast food stalls in bits of Paris where even the pissoir has an armed guard.) The coffee was pretty brilliant, too.

I do ponder sometimes about the breadth and scope of what I’m lucky enough to do for a living.

I wouldn’t pretend for a moment that showing people interesting places ranks with one of the world’s great professions or that I “change” things or even “make them better”.

But despite what I might sometimes wearily imply, my daily life doesn’t solely revolve around getting disinterested people on and off coaches, pointing the way to toilets and souvenir shops and worrying about deadlines. Well, it often includes deadlines but that’s about it. It would appear that I can entertain people and I revel in it.

Take my forthcoming job on Sunday. I’ll be working in Weston-super-Mare.

It’s the third different themed walk I’ve done in the town for a regular customer and the preparation for it has variously led me into stories of a Governor-General of India, a Shropshire authoress, Cardinal Newman and the luminosity of stars. I love doing Weston; it’s not technically my “patch” I suppose but I bend the rules a bit by claiming that it is effectively Birmingham-on-Sea! The place is endlessly interesting to me and surprising to clients. Nothing – absolutely nothing - gives me more of a “buzz” than feeling people are interested, surprised or intrigued by something I show them. It’s the showman in me, I suppose.

Iwouldn't rule out a change of direction, if only to avoid getting into a rut; but no two days are ever the same and – in an upbeat mood – I give thanks that I’m lucky enough to say that.

I Only Want a Coffee!

I tried to “simply” order a coffee in Oxford while waiting for my group yesterday morning. Goodness this is hard these days, isn’t it?

Would I like an Espresso, an Americano, a Latté, a Cappuccino, a Mocha, a Macchiato or a Caramel-latté?

Sugar? What sort of sugar?

Would I like skinny milk? Or Organic? What about Fairtrade or Soya, then?

Or a “Bilberry Special”, which is fresh? (Is the other stuff all stale or something?)

Next week’s lottery numbers? A run down on the five orders of classical architecture? Key to nuclear fission? Free return ticket to Vancouver?

I knew there was a reason I like tea!
Posted by Ian Jelf at 11:29 No comments:

Harry Patch and The End of an Era

I watched part of the proceedings of the funeral of Harry Patch yesterday afternoon.

The phrase “the end of an era” tends to get wheeled out too often, not least by me.

But that is what this really was. I’m sure Harry was a charming and special man to all those who knew him. But the crowds lining the streets of the lovely City of Wells today were not there just to remember him. This was our communal twenty first century goodbye to a generation whose sacrifices we grew up knowing about and who gave so very much, often the ultimate in fact, that we may enjoy the way of life which we have today.

Our country and our world is not perfect. But it is better for the sacrifice of those represented by one solitary Somerset man today.
Posted by Ian Jelf at 09:20 No comments:

A Journey Speeded by Culture

I’ve posted before about what a wonderful resource BBC Radio 4 is and how lucky we are to have it.

I drove back from a job in Oxford this afternoon and was enthralled for the whole journey by a combination of the Afternoon Play and an edition of “Open Country”.

The Afternoon Play, Normal and Nat was a disturbing but enthralling account of a schoolgirl who hears voices, while Open Country World War II Secrets of the Peak District looked at the area of the National Park closest to Sheffield and in particular its role in the Second World War. Tales of French Canadians practicing for D-Day and the remains of test fired ammunition vied with an amazing account of how an artist “decorated” the ground to resemble a railway yard to try to attract enemy bombers away from the actual City of Sheffield for attention.

It was one of those car journeys where you’re just praying that you won’t get home before the programme ends!

That’s the thing with Radio 4. You press the button and something interesting comes out.
Posted by Ian Jelf at 17:12 No comments: