It's usual for anyone with children or anyone to work in education to complain about the way in which prices for holidays, etc., go up in school holidays. All attempts to explain to them that they don't go "up" in holiday time, they go "down" in term time fall on the deaf ears of those who do not wish to hear. It's also called demand-pull inflation.
So it's unusual to hear of something whereby a special, heavily discounted offer in only available during school holidays.
I'm talking about London Midland's "£10 Great Escape" offer. You download a voucher from their website, present it at the station and can get a full day's travel on their network for £10. bearing in mind that that stretches from London to Liverpool, that can be a very good deal indeed.
The only downside (for us childless ones) is that it causes trains to be packed out with families! :-) Now that can plainly be a Good Thing.......but I do wonder how many of those journeys would have happened anyway (maybe not many, I don't know?) but why don't they try the (occasional) offer in term time, when presumably there are many more empty off-peak seats to fill?
Just a thought.
And overall it really is a good idea. I've now availed myself of it a couple of times and - apart from tiring myself out - can pronounce myself very happy with it!
Posted by Ian Jelf at 07:45 No comments:

I’d only ever been there once, in the 1980s and that was to look at the ex-London Routemaster buses that the local company put into operation on one route there at the time. Other than that, oh and knowing that it was the birthplace of John Bunyan, that was about it.

Now I pride myself that I can find interest and fascination in the most mundane of places. When you’ve concocted walks around and , Bethnal Green and , you learn to “sniff out” interesting stuff.

Well, although I could see some interesting buildings, especially a fine church, simply defeated me on this score. The walk from the station could be marketed as “The Scruffy Trail” (and some meaningful signs might help!) and even by current standards there was an above-average number of shops to let.

The markets looked large and busy but somehow I just couldn’t warm to the place and I spent an hour less there than I’d intended.

Rare for me that.

On the historic pavilion of the Grand Pier at was destroyed in a spectacular fire that made headlines around the world.

“If……. they do a good restoration job, it could be in the long run a good thing, raising the profile of [Weston] and allowing it to be better than ever.”

Well, skip forward just over 800 days…….and here we are. After a remarkably quick rebuild (and despite some delays), on Louise and I were lucky enough to be present for the re-opening of the new Grand Pier.

With a new pavilion designed by the architectural practice of Angus Meek, the Pier is back bigger and arguably better than ever. Yes, I miss the design of the original and part of me wishes that it had been rebuilt as a replica, a la St Kilda, . However, the new building is considerably larger (same footprint but taller), so there’s more inside, not just rides but bars, restaurants, conference facilities, even marriage rooms! This all makes the Pier a bigger attraction. And – significantly – that makes Weston itself a bigger attraction.

The English seaside has been through some difficult years but is not-so-slowly reinventing itself these days. Even before the era of recession, staycations (ugh!) and carbon footprints, people were re-discovering their “home” seaside. Weston in some ways was poorly-placed to attract “specialist” tourism (as the does with transport and motorcycle racing, Padstow with gastronomy or Southwold with simplicity and nostalgia). But Weston does have some significant things going for it.

There is a “buzz” in the town at the moment caused by the amount of inward investment.

Yes, there are some “bits” to deal with. The buildings of the central sea front aren’t yet a credit to the town. The Northern end of the Promenade needs some tidying up, especially now that the Royal Pier Hotel is no more and that could go hand-in-hand with the restoration of the “other” Pier, at Birnbeck. And don’t get me started on the Tropicana (the former Open Air Swimming Pool whose fate is easily Weston’s biggest shame). 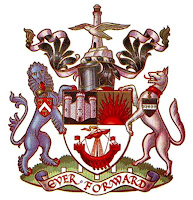 But the town is on the up. The motto on its coat of arms (borrowed from !) is “Ever Forward”. Seldom has it been more appropriate.

Some 18 years ago, I started my tourist guiding career working on the open top double decker buses run by the much-missed “Guide Friday” company in .

The concept of guided tours of was something of a novelty then and the small team that worked on them in that first season was really instilled with a sense of pride and excitement in a City which for too long had been the butt of jokes.

Well, fast forward. Almost by accident, I spend years tour managing all over Europe, qualify as a Blue Badge Guide in the Heart of England and then London and carve a small business for myself doing specialist tours of all sorts of unusual places for more “discerning” clients.

But - among my peers at least – I’ve always been thought of as a “Birmingham Guide”. Despite this, in recent years has rather reduced in importance for me and the number of tours I do of it as a proportion of my total work is nowadays quite small.

So this last week has been something of a change for me, as a party of musicians booked me for five consecutive and identical days entirely in for successive groups. Their itinerary was great, too: a coach tour, a City Centre walk, lunch at the Old Joint Stock and afternoon visits to the woefully-unvisited Saint Mary’s Handsworth and the splendidly renovated Aston Hall.

And do you know what? I’ve rediscovered my wonderful, impressive, unequalled home city. People are stunned by the greenery, the housing, the historic characters, the cultural heritage and the welcome. The staff at Saint Mary’s and Aston Hall have been so fabulous to deal with they’ve been like a breath of fresh air (after the sort of characters you get “welcoming” you at places like Blenheim).

Service isn’t always geared to international visitors and I wish shopkeepers in suburban strips like Stirchley and Bournbrook would tidy up their premises. But the coach driver (from Chauffeurs of Birmingham, a new firm to me) was exceptional.

Yes, it it’s not actually all that bad at all. I’m proud to be a Brummie again!

A Word in Defence of London Underground

Many people will have seen, or rather heard, the recordings released for the first time at the inquest into the 7 July Terrorist Murders in .

If you haven’t some examples are at:

As so often happens with the media, journalists in search of a sound-bit type quote get emotionally charged friends and family to become angry and to use words like “shambolic” which are succinct but frankly inaccurate.

I think the staff of London Underground are getting very unfair treatment here. The "confusion" was very soon after the explosions (of which there were three at disparate locations within 90 seconds) and I think that no organisation could realistically have reacted differently. It may be that people would prefer staff to react in an excited frantic and dramatic way, they way we see on television or in the cinema. In fact, people remaining calm might not make a “good story” but it is the best way of dealing with a situation.

Indeed, some of the stories which have emerged about help, compassion and heroism from some of the station staff deserve a higher profile than this.

There were a lot of heroes that day. And I defy anyone to have reacted better, other than with that wonderful thing, “the benefit of hindsight”.

I had a job in Stratford-upon-Avon this afternoon.
Whenever I work there, I endeavour to use the Park & Ride service, preferring to pay £1.50 to be taken in in luxury to searching for a parking spot and then having to take out a mortgage to pay for it.
I knew that the service doesn't operate on Sunday in the winter so before leaving checked the website to see if today had a service or not. Apparently it didn't. Okay, at least I know (even though parking restrictions aren't somehow eased when there's no P&R, which seems a bit like wanting to have your cake and eat it).
So I drove down there and was surprised and delighted to see the matrix on the A3400 just north of the bypass proudly flashing "For Stratford Use Park & Ride", so I headed off to the car park to use it after all. I signalled into the car park.......and was immediately met by locked gates because indeed the service doesn't run on Sundays at this time of year.
Turn the matrices off folks, eh? It makes a bad impression. And if visitors didn't know better, they'd think the town didn't know what it was doing.......
Posted by Ian Jelf at 16:10 No comments: