All the Gs: Groups, Gardens, Gold and Generalising

Do you ever get the feeling that – as you finish one task-in-hand – two more pop up to replace it?

That’s certainly the feeling I’ve had today. Completing a whole host of documents for the accountant (Why do I have to do all this work? It’s like cleaning up before the cleaner arrives!) I’ve now found myself with two new tour routes to measure out for some very diverse groups I have coming, a project to complete for a course I’m doing, e-mails to reply to and – more mundanely – a garden fence to get built.

The garden fence is as a result of us having had all the leylandii cleared from the back garden. The term “garden” though is a very approximate one at the moment. Even the wreck of a lawn we had is now buried until several tons of sawdust and assorted twigs. We’ve discovered that the garden is longer than we thought and that previous occupants used the top part as a dumping ground. The stuff “buried” there is incredible, at least in volume. I’m wondering whether or not to get a metal detector and see if there’s anything left over from the Anglo-Saxon conquest of in the 6th century…….

I went on a behind the scenes visit to the amazing Birmingham Museums & Art Gallery Collection Centre (ie store) in Nechells today.

When the store is opened (on a couple of weekends per year and at other times for private group bookings) it is immensely popular. This – like the recent queues to see the Staffordshire Hoard – suggest that there is great appetite for this sort of Museum in the area. We have endured trends in recent years away from “traditional” museums with exhibits lined up ion favour of more “trendy” ways of imparting knowledge. In fact, it seems to me that a lot of the “traditional” stuff is the most popular with people and somehow strikes a chord with them.

I have a great idea. Why not transfer the stuff in store to a new building in the centre of the City. I’m sure they could find a site. There’s a vacant site in that would fit the bill and there’s not a lot in the old Elkington’s Electro-Plating works next to it at the moment. Then you could open the “store” more frequently. Say, er, every day.

You know what? People would love it. And no, my tongue isn’t entirely in my cheek saying this…….

PS I was wondering where the giant turtle shell from Aston Hall had gone. It was in a corner there!

Britain and the Hospitality Industry

What is it about service in that’s so difficult?

After I finished a walking tour in yesterday some of us (twelve initially) headed into a pub for a drink and a bite to eat.

Now admittedly the manageress (?) on seeing so many of us said that we could sit in the (empty) restaurant and order from the bar menu. Great; nice gesture. But once it became apparent that we wanted to pay separately (uh, yeah?) we suddenly seemed to become A Problem.

Things were compounded when four other people from the tour spotted us and came in to join us. Suddenly we were somewhat accusingly told that we were “more than twelve”.

Yes, okay, suddenly there were a lot of people all wanting to order. But you know what? No-one else seemed to be eating in this place at all. The alternative is that no-one comes in. Hey, wouldn’t that be better eh? Service provision is so much easier if there are no customers.

I’ve seen this in quite a few places when handling groups, even quite “informal” ones. Turn up in or under these circumstances and people Work Out a Way of Doing It. Turn up in (or , actually) and suddenly you’re a nuisance.

We’ve been to the recently reopened and refurbished Aston Hall this afternoon.

Well, after a major injection of Lottery money and a great deal of hard work Aston Hall is now open again and looking better than ever. A great deal of thought has gone into presentation (I loved the “how was it built?” and “what is it made of?” displays) and I revelled in it. There are also more rooms open and the place has a “quality” feel about it.

Aston Hall was one of the first places I was taken on a school trip (in 1973, when I was at primary school). For that reason it’s always had a special place in my heart and I’m very pleased to have an old friend “back”.

Negative points? Only a few niggles.:

Go as soon as you can!

Well, we're back home from a lovely (and it was lovely) week in Paris.
We went there and back by Eurostar (slumming it in Standard Class this time, though; we spent the money one getting a centrally-located hotel instead). As ever for us, the journey was part of the holiday. Or rather it would have been if the handle on my suitcase hadn't broken early in the outward journey.
I might (if I ever get time) write up a fuller account of what we did. For now, though, the highlights were: 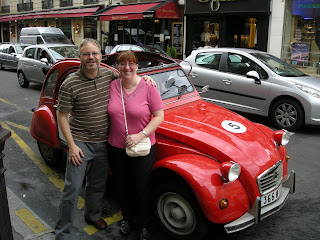 However, as I'm now back, there seems to be a whole raft of things to do. There are 136 e-mails for a start, although I suspect most of those are junk. Then we have to go to the optician's, to collect a mysterious parcel at the Post Office, see the respective mothers, collect the cat and the - just possibly - start taking a proper look at how many of the 800+ photos we've taken between us are actually usable!
The holiday was supposed to be a rest before as "busy time". I think I'm already realising that it has been.......
Posted by Ian Jelf at 09:40 No comments:

We've been to see the Staffordshire Hoard at the Birmingham Museum & Art Gallery this morning (the only chance we were going to have to see it).
The Hoard - for those of you reading this from outside the area - has been the talk of the region for a couple of weeks now, one of the most significant finds from the so-called "DarkAges" ever made in Britain. Having been declared Treasure Trove by a coroner, there is much hope that it might be acquired by a consortium of local museums but in the meantime, a small part of the Hoard has been put on display here in Birmingham.
Interest has been intense and people have been queueing for in excess of two hours to see just a small collection. Those who say that the days of the traditional museum, with exhibits in glass cases, are gone and that everything now has to be interactive really are talking through their bottoms (as I've always maintained). They need to witness the public interest being shown here.
We arrived at 9.00am, just as they were opening and our "queueing" time was only about 10 minutes. In fact, the "selection" on display was considerably more than I'd been expecting and was enough to make my jaw drop more than once. There is some genuinely absorbing stuff here and I can't wait to hear what the experts have to say. It's bound to keep them busy for years to come!
There's not long left to see it now; if you're nearby, choose your visiting time carefully but go if you can!
Posted by Ian Jelf at 11:23 No comments:

I've been missing somewhat from the Blog lately as work seems to have gone completely bonkers.
As much as there was any pattern to it, many of my jobs lately seemed to involve students starting terms at the various local universities. To this end, I've been taking people around Birmingham and Coventry and - bizarrely - freshers from the University of Warwick to, er, Oxford for the day. Odd but this is a regular and much cherished booking each year. I'm happy to report that this year's intake seemed noticeably much alert and interested than some previous ones. Or maybe I'm just getting older and used to it!
In other news.......
I've enrolled to take exams for another Blue Badge, this time for the South West of England. This is a region very close to my heart (well parts of it anyway) but learning the required stuff for such a vast area is a tall order. Add to that a course I was already committed to to study the venues being used in London for the 2012 Olympics and I suspect I'll be having one of my hardest winters since I was a student, some 25 years ago!
And finally, I was asked by a regular client to do a new Birmingham walk this weekend. Given that they've done every conceivable "take" on Birmingham (and a number of inconceivable ones, like "Birmingham: City of Love"!), "something new" is a bit of a tall order. However, rising to the challenge, I took them to look at the bewildering variety of terracotta buildings which adorn the City Centre. I loved doing it, leading to another of those self-indulging posts I make here where I tell cyberspace how happy I am!
Posted by Ian Jelf at 18:06 No comments: