When I took my US group to see the outside of Aston Hall last Thursday, I was surprised and delighted to have a member of staff there come out to us and ask if we’d like to have a look in the (locked) garden. This, like the Hall, is closed at this time of year but – with the recent restoration – he was obviously very keen to show off whatever he could of the place. “Money well spent” he chipped in when I told the group that it was partially Lottery-funded. And he was right. 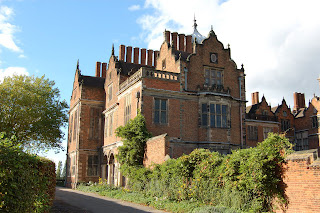 I’ve been very negative about some aspects of tourism in lately but this rather bucked the trend. He was young and Asian and I was (but shouldn’t have been) surprised to see someone like that enthuse about a Jacobean country house and its garden. This says more about me than him and I’m happy to show my gratitude for his eagerness in public.

This sort of enthusiasm comes with a new project and if you get everyone on side it can really pay dividends. It took me back to the heady years of 1992 and the small team of us starting up the Guide Friday open top bus tours in . We were just like that: we loved what we were doing and felt terribly positive about it. Those were the days!

A few more people like him and Aston Hall will be one of the jewels of again.