I Need a Rest! 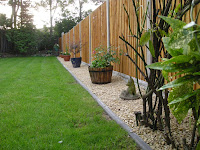 I worked in Tamworth, a lovely and interesting old Staffordshire town which deserves better than the "chav-filled hell-hole" reputation it has among some people. Mostly ones from Lichfield and Sutton actually but I digress.......
The days work done, we came home for a "spot" (ha!) of gardening. It's nearly two weeks since the lawns were done and we're unlikely to have much chance to do a "heavy" garden session in the coming days. So, off to work we set. and what fun it was:
I wish I was back at work!
Posted by Ian Jelf at 16:36